Welcome to the pit...

There's a trope in comic books that goes something like this: When a new character joins a team, the cover features the heroes looking menacing. The tagline is a variation on the theme of "Hey, new guy! Welcome to the team! Hope you survive the experience!"

This past week, I had a real dream-come-true moment. I got a message that I was going to get to shoot photos for a show on an international tour. Just in general, this would have been amazing enough. But the icing, the cherry, and the extra piece of cake on top of that cake was that the show was for Iron Maiden. I mean, they've simply been one of my favorite bands for twenty or thirty years. No big deal, right?

So, in an effort to not look like the complete amateur I am, I started digging. I was looking at tips, advice, and stories from concert photographers. And that's when I learned about the pit.

See, the pit in this case refers to the fairly narrow space between the stage and the maniac fans pressed right up to the barrier. This small space is where security stands, technicians for the tour move through, video guys are shooting for the live big screen. And this is where the photographers stand to get the shots you see from concerts.

Typically, photographers have access for the first three songs of the set. Then they get out of the way and let those front-row maniacs enjoy the show without distraction. What that means, though, is you have all these guys and gals swinging cameras, lenses, and themselves all over the place trying to get "the shot" in around 12 minutes (give or take, with 4-minute songs). Everyone wants "the shot" and everyone's trying to use the same two-foot-square piece of real estate to get that perfect position. As I read more on the etiquette, I was educated on how to get around other photogs, how to get my shot and get the hell out of the way so others can get theirs. All the things that make working in that small space bearable.

So, with this knowledge in hand, that old comic book trope started running through my head. I had, essentially 24-hours notice to make sure my gear was ready, to arrange a place to stay (God bless understanding family!), and to get myself to Chicago (about 5 hours) in time to take my place. And through all of this, all I kept thinking was "Welcome to the pit, Mike! Hope you survive the experience!"

I got to the venue - the Madhouse on Madison, the United Center in Chicago - way to early, because I'd been anticipating worse traffic. I was so early, when I pulled into the parking lot, the lot technically wasn't even open yet. I had to check in at will-call and contact the PR rep on site to get things arranged, but I couldn't leave my car. Getting towed that far from home  - and while broke as all get-out! - would have been very, very bad. So I called the venue to see if they could put me in touch with the PR rep I needed to reach. No luck. I was so early, the tour people weren't even there yet.

So I waited. I cleaned my lenses one more time. And then waited some more. Finally the lot "opened" and I talked to one of the parking guys. Yes, I was in the right spot, but no, parking wasn't free. So I paid the man for the little piece of cardboard that said "you're good, your car will still be here when you get back!", and I set off to find my ticket.

That part was easy. The will-call windows were moving fast, and after I handed over my ID, they handed it back with my ticket in about thirty seconds. Fast and efficient, now I just had to wait (again) for the PR rep to check my paperwork and give me my photo pass. And that's when it got really real. 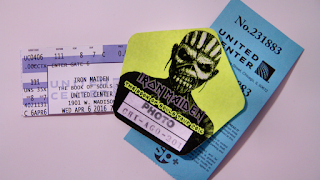 This is also when I met my fellow pit-dwellers for the night. Just from listening to them talk, these were all old hands at that job. "Were you in Detroit last night?" "No, I was going to, but they had me go to Cleveland instead..." They knew each other, and they were talking about how other folks they knew in common had been shut out of this show. That was daunting - folks with experience doing this stuff were told no, and here I was with a decal that let me go places I have dreamed about. Why? What made the PR guy pick me? I have no idea, and I'm not going to ask (because something about gift horses and such).

I want to say, I'm proud of my photo work. I think I'm decent, and I'm not of the opinion that I didn't belong there. I have a healthy enough ego to think that I'm good enough, or I wouldn't be there, plain and simple. But I'm also a realist. These folks, who were nice as could be, inviting and welcoming into their club, were pros. They had me outclassed in experience, and had me outgunned in equipment. At that moment in time, though - 7:30pm Central Daylight Time, in Chicago, IL - it didn't matter. As we all checked gear one last time, mounted lenses to bodies, got earplugs ready, I was one of them. I took a breath, and then we were off.

Down a flight of stairs and we were in a white hallway. Dayglow-green signs were posted on doors: "Band room," "Rod's Room*," all these places set aside where, behind closed doors, were the guys I'd listened to for most of my life. And I was here, under the seats, with them. And those doors at the end of the hall opened and we were led out onto the arena floor. Past the crowds in the seats, and the cattle-call of people in general admission. This was the opening act, so there were only four photographers. We all found a comfortable place in the pit to start the night. I heard someone in the crowd behind me say "you know it's about to start when they bring these guys out!"

Holy crap! That was me he was talking about! I was his indicator that the show was coming. That was at the time, and still is, two days later, bizarre for me to think about.

After we got the first songs committed to film (or digital media, actually), we were led back through the hall to the holding area to wait for the headliner. Then the process was repeated - down the white halls, through the doors, only this time, the place was packed. Just absolutely stuffed to the gills with people. Unlike the opening act, this time we were stopped by a representative of the band. A very kind, polite young British woman explained that the show would open with a blast of pyrotechnics, and that it would be very hot and bright, so be ready. Boy, was she ever not kidding! Those controlled bursts of flame are HOT! But it didn't matter. I was there. This time, the pit was more crowded, with two more photographers, the video guys, security, band staff, etc. But it wasn't at all like I'd read about. There was no real bumping, no one in each others' way. It was the epitome of professional courtesy.

Maybe this was an unusual occurrence because they had been so stingy with the photo passes. But, for me, it was a dream come true. I was in the pit.

And I survived the experience.

See my review and photos at The Herald-Whig.

*for those who don't know, Rod Smallwood is Iron Maiden's manager. He's a legend for running a tight ship and keeping absolute control over the access on tours. I didn't see him, but even seeing his name on the door mean I was "there."